Showing posts from June, 2013
Show all

#Wipmadness Passing on the Pom-Poms for July 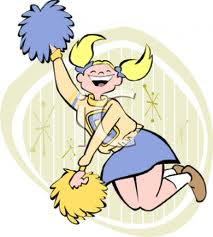 It's been fun, everyone! Now I'm passing my #wipmadness pom-poms to Angelina who will host the month of July! http://yascribe.blogspot.com/ Now the winner for last month is Mary Ann! Email me at ixtumea@gmail.com for the book you'd like! I still have:
1 comment
Read more 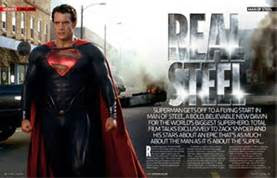 1. This week son's been away at scout camp in the Sierra Nevadas. It's been kind of strange and very quiet around here. 2. Husband took the week off so we've been catching up on movies. Saw: Verdict? I thought it was pretty good. Loved this actor in The Tudors and he didn't disappoint in this latest version. The only thing that did bother me was all the flashbacks and he seemed to be brooding alot. We did go to the luxury theater to experience the comfy chairs and dining service. The tickets cost $34 for the two of us and for lunch it ended up being $24 for sandwiches, $11 for drinks, $6.50 for popcorn, and $5 for beer battered fries. Total cost? $89 which included a tip. We loved the chairs and the experience. Didn't like the very high prices but heck it's not called luxury theater for nothing. 3. Now You See Me This was a very fast paced show that kept us on our toes. What we liked was the who done it wasn't who we thought it would
2 comments
Read more

OCD, THE DUDE, AND ME

I'm excited to be a part of this blog tour! My YA Books Central review: http://www.yabookscentral.com/yafiction/15487-ocd-the-dude-and-me Here's a teaser of my review: I felt the voice of this book was right on the mark. Danielle's struggles and the way she looks at the world reminded me of my son. This story doesn’t follow the usual storytelling format but rather is told in a journal type style that also reflects the character so much. This is Danielle’s senior year in high school. She has her own share of highs and lows and is recording her me-moir, hoping her last year in high school will be eventful. A classroom trip to England is approaching and Danielle isn’t sure she wants to go. She doesn’t think she’s attractive but rather fat with unmanageable hair. A series of events happen that help her not only grow but come out of her shell. I loved Danielle. Her almost blunt-like behavior might come across as too abrupt to some but to me felt very real. The author
Post a Comment
Read more 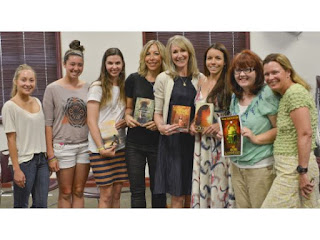 Cool! I made the local paper news: http://www.ocregister.com/articles/book-514346-discussed-authors.html?pic=1 Apparently you have to have an account to pull up link so here's what was in the article: ORANGE COUNTY REGISTER RANCHO SANTA MARGARITA – Authors Kathryn Fitzmaurice, Jessi Kirby, Morgan Matson, Kim Baccellia and Laurie Stolarz were at the Rancho Santa Margarita Library Saturday to meet with teen readers to discuss their books, writing styles and lives as writers. The authors write books for teens and young adults. Fitzmaurice discussed her book "Destiny, Rewritten" and Kirby talked about her book "Golden," while Matson talked about how she conducted research for her second book, "Second Chance Summer." Baccellia discussed the design of her new book, "No More Goddesses," and Stolarz discussed the plot of her book "Deadly Little Lessons." Plus here's me discussing my writing process:
1 comment
Read more

#Wipmadness Week 4 Give Yourself Credit 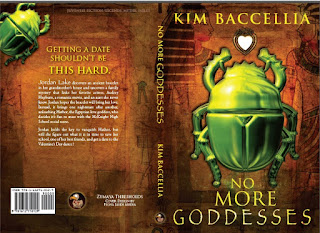 First off, I thought I'd share the cover of my upcoming book NO MORE GODDESSES: What you all think? I think this calls for a happy dance! Also rumor has it NO MORE GODDESSES should be out the first week of July! I also was able to attend a YA author panel at a local library and got to share my own writing with some teens who attended. It was so much fun meeting these amazing authors! Right now reading GOLDEN by Jessi Kirby. She's the author on the far right. You all should see her book. It's gorgeous! I also finally got to meet Laurie Faria Stolarz author of DEADLY LITTLE LESSONS and my favorite YA paranormal series BLUE IS FOR NIGHTMARES. Plus Kathyrn Fitzmaurice author of the adorable MG--THE YEAR THE SWALLOWS CAME EARLY. **Kathyrn also took a class from my former UCIrvine writing mentor, Louella Nelson. Talk about a small world! Now for our theme today I thought I'd tie in something from the above photo. Notice something? Yes, I'm not
20 comments
Read more 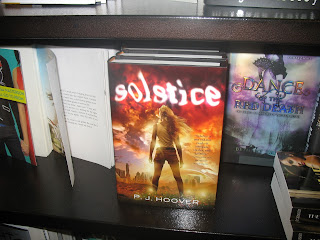 1. Yesterday went to local Barnes and Noble to pick up a copy of author friend PJ Hoover's book SOLSTICE: Love this book! I was lucky enough to be a Beta reader for this book before it got picked up! My YA Books Central review: http://www.yabookscentral.com/yafiction/10306-solstice Teaser: I loved this story! This is one page turning tale that has a little bit of everything-- romance, mystery, Greek mythology, all in a futuristic world. Everything from the world building to the characters hooked me from the very beginning. This unique dystopia mixes Greek mythology with characters that literally sizzle. The future world is bleak and global warming is no longer just a theory. Piper's character is sheltered so when Shayne shows up, of course she wants to find out more about him. The author does a great job of showing a futuristic world in it's hellish horror along with characters we care about. The bad boy Reese is also very hot. He oozes sexuality and hints of t
Post a Comment
Read more 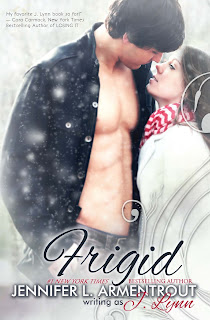 Today is an exciting day - we have FOUR HUGE SURPRISES for you! Jennifer L. Armentrout's (writing as J. Lynn) FRIGID is set to release on e-book at the end of July. If you're anything like us, you're probably on pins and needles and just cannot wait to get your hands on a copy of this book. FRIGID has already been given the honor of being named a Romantic Times Top Pick and we're super excited for you to be able to read it as well! Well, there's good news! Are you ready for those four awesome surprises? Here we go! 1. Due to all the excitement surrounding FRIGID, we have decided to run a special e-book pre-order promotion. We have worked out a deal with the distributor to release FRIGID a full two weeks early -- on JULY 15th!!! -- if we meet our e-book pre-order goal. EEEEP! That's right, if you are like the rest of us and want to be able to read FRIGID in its entirety before its original release date, all you have to do is PRE-ORDER THE E-BOOK NOW! What are
1 comment
Read more

I know, I know. Celebrate rejections? Who likes being rejected? I admit when I first started seriously writing back in 2002, I was told to expect not just some but tons of rejections. Of course, being all excited about my decision to write my first novel, I figured I could deal with it. But actually getting the rejections at first did hurt. I felt like this: Or even like this: Sara Blakely, founder of Spanx, once shared this about what she learned about rejections: Life lesson learned as a child: My dad encouraged us to fail. Growing up, he would ask us what we failed at that week. If we didn't have something, he would be disappointed. It changed my mindset at an early age that failure is not the outcome, failure is not trying. Don't be afraid to fail. Read more: http://www.entrepreneur.com/article/219367#ixzz2WRD0M8mA Also from A YEAR OF WRITING DANGEROUSLY by Barbara Abercrombie: 25. Failing better: A couple writers I know have a quote by Samuel
19 comments
Read more 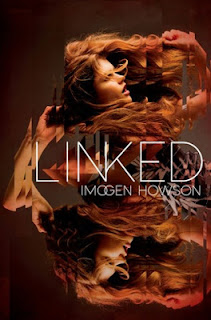 1. Still in a burnt out mode after this school year. Totally need a break but it seems every weekend is crazy with son's birthday, Father's Day, son's first week long scout camp, and an upcoming library author panel. Busy, busy, busy! 2. Have been trying to get some reading in! Found this one through an email from S/S. Sounded very intriguing: Here's the blurb: Elissa used to have it all: looks, popularity, and a bright future. But for the last three years, she’s been struggling with terrifying visions, phantom pains, and mysterious bruises that appear out of nowhere. Finally, she’s promised a cure: minor surgery to burn out the overactive area of her brain. But on the eve of the procedure, she discovers the shocking truth behind her hallucinations: she’s been seeing the world through another girl’s eyes. Elissa follows her visions, and finds a battered, broken girl on the run. A girl—Lin—who looks exactly like Elissa, down to the matching bruises. The t
2 comments
Read more

#Wipmadness Week 2: Get Out of Your Comfort Zone 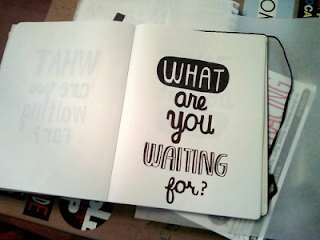 Last Saturday I attended my local OCCRWA meeting. I love the high energy and how supportive these romance writers are. It's tradition in my charter to get a rose for each book contract you sign. I was excited that I got one! I then got to give a little spill on NO MORE GODDESSES. Very fun! Part of our meetings is hearing speakers. One such romance author, Elizabeth Boyle, spoke on 'Get Out of Your Comfort Zone.' I loved her presentation and thought it was PERFECT for today's theme. One big thing she said was, "How do you get out your comfort zone without getting out and doing something?" Some notes from the meeting: Write down your goals. There's power in doing this and makes them more real. So what are your goals? The big mantra of her presentation: JUST DO IT. No excuses. The more you write-the easier the words flow. She gave us a challenge: Write 1 hour a day for 5 days a week. Write 1k a day. Have writing sprints to help
20 comments
Read more 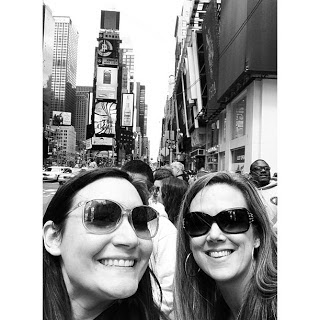 1. Fellow YA Books Central reviewer Jen (cupcakegirly) posted her take on BEA. Fun post! http://jenuinecupcakes.blogspot.com/2013/06/ten-reasons-you-should-go-to-bea.html?spref=fb Love this photo of Mandy and Jen in NYC! **Jen took so many fab photos of her and other authors/bloggers that it makes me realize I need to do the same thing for ALA14. I admit I don't like having my photo taken as I'm always finding flaws with myself. Need to get over that! 2. Son's birthday was on Monday. He's now 12 years old! Wowza! 3. Last week of school which means I've been rushing getting paperwork, tests, and other things done. Next school year son will be a seventh grader! OMG, middle school! 4. Read: Love this series so much as I'm a huge fan of anything that deals with King Henry VIII! This one is told through the eyes of his fourth wife Catherine, 'Cat' and her friend Katherine 'Kitty'. Great voice! 5. Another read: Y
Post a Comment
Read more
More posts